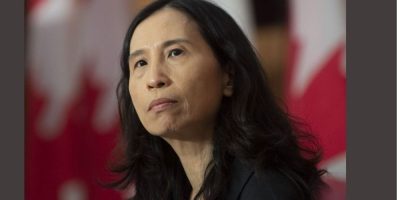 The national public health agency is preparing for “worst-case scenario” COVID-19 variants that can evade immunity, Canada’s top doctor told members of Parliament Tuesday, as early signs point to a fall resurgence of the virus.

At the House of Commons health committee, Chief Public Health Officer Dr. Theresa Tam said the Public Health Agency of Canada is keeping a particularly careful eye on the evolution of Omicron variants, which are the most common subvariants in the country, along with any new mutations.

“We haven’t detected any very extraordinary appearances as yet, but that is a scenario that we’re planning ahead for,” Tam said during her virtual appearance at the committee.

In the early days of the pandemic, the virus would mutate in all sorts of ways because people did not have immunity from previous infections or vaccines.

Now, because the virus has been constrained, several subvariants of Omicron have begun to develop identical mutations — a phenomenon known as evolutionary convergence.

“When there’s broad population immunity, it puts pressure on the virus to find advantages, such as escaping our existing immunity,” Tam said.

The worst-case scenario, Tam said, is that eventually a variant will find a way to sidestep the effectiveness of vaccines and treatment with monoclonal antibodies.

“We haven’t detected one of those yet, but we need to be prepared for the potential,” she said.

The COVID-19 situation in Canada has remained relatively steady as of the first week of October, even as the weather has cooled and students have returned to school. Early signs are beginning to show a potential resurgence, Tam said, with the number of hospitalizations increasing in some parts of the country.

In the meantime, only 18 per cent of eligible Canadians are up-to-date on their vaccinations with a two-dose primary series and a booster within the last six months, Tam said.

“The good news is that we do have these bivalent vaccines,” which target both the original strain of COVID-19 and more recent offshoots, Tam said. So far about five per cent of eligible Canadians have received a bivalent shot.

She said the agency is working on building momentum around those new vaccines to try to increase the number of people who get the shot this fall.

But Tam took a barrage of criticism from Conservative members of the committee over her communication throughout the pandemic, as MPs charged that the public has “lost trust” in institutions like the public health agency.

If another really bad virus came along that required lockdowns and other measures, “Canadians wouldn’t listen to you,” Saskatchewan Conservative MP Randy Hoback said to Tam.

“They would say ‘Never. We’re never doing this again. We don’t trust you, we don’t listen to you.’ And we’d see then the massive deaths that would be the result.”

Alberta MP Laila Goodridge told Tam there was a disconnect between the public health agency’s advice and what she hears about daily life in rural Canada, and suggested the chief public health officer visit those places in person.

Several MPs asked Tam whether there would be a post-mortem of Canada’s COVID-19 response. Tam agreed it will be important to review and learn lessons from how the country handled the virus, but wouldn’t comment on any specific plans.

“We’ve just been through the biggest pandemic of the current era and it is very important to take note of lessons learned and be as objective as we can,” Tam said.

“It’s important to set us up well for our response going into the future, given that pandemics will occur again.”