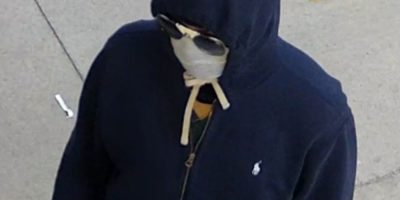 Police services in South Simcoe, Peel and Halton are comparing notes after a string of pharmacy robberies that occurred during a nearly three-hour timeframe on April 26, 2022.

Halton Region Police say around 7 p.m., a pharmacy in Milton was robbed. As one male remained at the entrance and held the door open, the other suspect demanded staff open the narcotics safe. The culprits made off with narcotics and cash from the register, and fled in a stolen 2017 blue Jaguar F5, which police say has been recovered.

The same suspects are believed to be responsible for pharmacy robberies the same day in Peel Region (7:30 p.m.) and in Bradford (5:00 p.m.) at a store in the area of Holland Street West and Langford Boulevard. The vehicle description in both robberies was the same as the one used in Milton.

Suspect 2: male, approximately 6’ tall, wearing a blue hoodie with a white logo on the chest, black pants and black sunglasses.

Anyone with information regarding this investigation is asked to contact Det. Mike Maltar of the 1 District Criminal Investigations Bureau at 905-825-4777 ext. 2417 or Crime Stoppers.