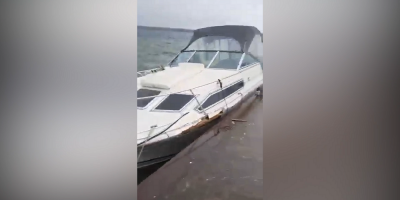 The high wind blowing across the region on Wednesday certainly left its mark, least of which on a watercraft the South Simcoe Police pulled from the water.

A video posted by the South Simcoe Police Service shows damage to the craft, presumably caused by it striking the dock during high winds and rough water Wednesday. Police believe the boat had been docked at the Government Dock at 30th Sideroad since Monday.

Over fears the craft would sink, police towed the boat from the water and took it to a salvage facility in Oro-Medonte. Police said the owner has been identified and contacted.