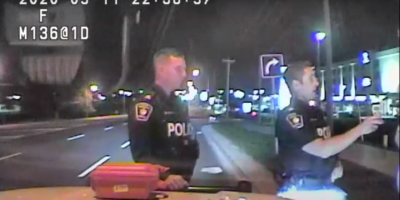 A call from a concerned citizen led police to pull over a suspected drunk driver with a small child in the car.

York Regional Police were contacted on Friday, just before 10:30 p.m. by a motorist following a vehicle that had nearly struck another. Police tracked down the suspect vehicle in the area of Yonge St. and Davis Dr. in Newmarket, saying the driver of the vehicle was showing signs of impairment. Officers say there were two other adults and a six-year-old child in the car.

A video of the incident, showing a driver failing a roadside breath test, has been released by York Regional Police

A 28-year-old Newmarket woman has been charged with drunk driving and driving without a licence.