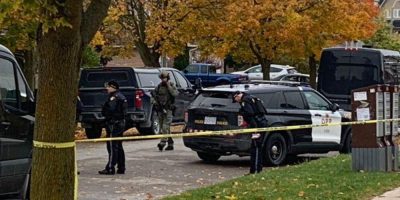 A male is in custody following a standoff with police in Alcona.

By mid-morning, a male was seen on the street being led by officers to a cruiser.

Several neighbours said police had been in the area since around 1:30 a.m.

A woman told Barrie 360 she and her boyfriend were parked in their vehicle around 1:00 a.m. on Huron Court when they were confronted by two males, who she says punched at the passenger window and threw mud at it, and then began swearing at them and telling them to get out of the vehicle. The woman says she told her boyfriend to drive away because she saw someone pointing something at them, though she was unsure if it was a weapon.

They contacted the police, and the woman said another individual showed up at the detachment and that person reported being robbed at gunpoint while in a vehicle.

According to the woman, police told her the incident at Huron Court and the robbery involving that vehicle were connected, that one person was in custody and a second person was barricaded inside a home.

As of Wednesday afternoon, police had not confirmed if any charges had been laid.

Police tweeted earlier that there was no threat to the public and that Alcona Glen Elementary school was not impacted.