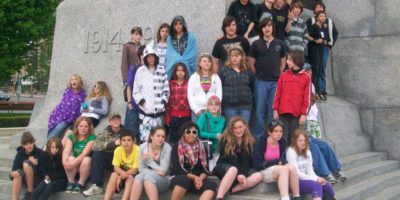 Cindy Pearson of Waubaushene didn’t think anyone would come when her son told her he wanted a youth group in the Tay Township village.

Tragically, Benny did not get an opportunity to start his project.

In August 2009, the 14 year old was riding his bicycle when he was struck and killed by a car that veered off the road.

After lots of research and consulting, the ‘Benny Club’ opened in March 2011. It is geared to children and youth of all ages.

On February 21 in Niagara Falls, Pearson will be presented with the 2019 Community Award for Youth Service. She was selected by the Committee of Youth Officers for the province of Ontario.

” The Benny Club has supported and assisted hundreds of children in Waubaushene and the Tay Township area,” said Southern Georgian Bay OPP Constable David Hobson, who nominated Pearson for the award. “It has had a phenomenal impact on a lot of children.”

Pearson says winning the award has been totally amazing and she was shocked to have been selected.

The Canada Post employee says 87 children attended one of the events at the Benny Club and that’s when Pearson realized that the kids were coming and they were here. Last month, 176 kids came through the door.

“They come. It’s free and it’s safe. The kids aren’t going to be on their cellphones. We’re doing old-fashioned type stuff, like board games, plasticine, sports and talent shows.”

The group meets twice a week in the evening in a portable behind the fire hall in Waubaushene.

Pearson works with a small group of volunteers, one that has been with her since the club doors opened, and two others who can assist when they can.

She says Benny thought a youth group would be a place for high school kids to get their volunteer hours. He even had in his mind what the club would look like.