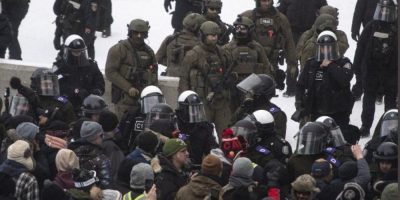 The Ontario Provincial Police warned last winter that support for the “Freedom Convoy” from Canadian political figures was likely to embolden protesters in the streets of downtown Ottawa.

The assessment was in a report compiled Feb. 6, more than a week after demonstrators first arrived in the National Capital Region, many driving large, honking semi-trucks.

“The apparent support from Canadian political figures is certain to further embolden those organizing and participating in the blockade, lending credibility and validating their tactics,” the report read.

“Any such validation may also motivate further blockades elsewhere in the country, such as those in Alberta.”

The intelligence, which was presented as evidence to the public inquiry examining the federal Liberal government’s use of the Emergencies Act, did not mention any political figures by name.

But those who expressed support for the Ottawa protests included Randy Hillier, who was at the time an Independent member of the Ontario legislature, People’s Party of Canada Leader Maxime Bernier and many Conservative members of Parliament, including the party’s now-leader, Pierre Poilievre.

At the time, Poilievre shared images of himself giving coffee to protesters as they drove into the region.

On Feb. 2, a group of Conservative MPs from Saskatchewan, including former party leader Andrew Scheer, posed for a photo with protesters on Ottawa’s streets, which Saskatoon representative Kevin Waugh shared on Twitter.

“It’s great to see Canadians championing freedom on Parliament Hill,” Waugh tweeted. He later said he was there to listen to protesters’ concerns.

Ottawa Mayor Jim Watson slammed the move by the MPs as an “absolute disgrace” and asked for an apology.