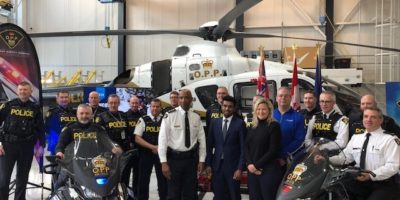 Grim stats from the OPP that police hope will make snowmobile operators think the next time they head out on to the trails.

At a news conference at provincial police headquarters in Orillia today to mark Snowmobile Safety Week (Jan 18-26), the OPP released 10 years of data (2009-19) that found of the 175 snowmobile fatalities investigated by the force, alcohol was involved in nearly half (45 percent) of the deaths.

The other top contributing factors were excessive speed, loss of control and driving too fast for the conditions.

“All of these deaths appear to be completely preventable and avoidable.” says Sgt. Paul Potter, provincial coordinator of the OPP snowmobile program.

“We are trying to counter that through our awareness pieces but some people aren’t getting the message.”

Police say it’s not just about enforcement. Potter says it is also about awareness and education on the trails, something the OPP does in conjunction with local communities and snowmobile clubs.

One area that Potter cannot stress enough is that no ice is safe ice.

The data revealed that almost half (45 per cent) of the snowmobilers who died were travelling on frozen lakes or rivers at the time of the incident. The circumstances that led to the deaths include intentionally driving into open water(puddle jumping/water skipping), breaking through the ice and collisions with other snowmobiles and natural landmarks.

“We absolutely say no ice is safe ice,” says Potter. “If the trail happens to cross a waterway and has been staked and it has been checked and you can verify.”

Potter says the decision is still that of the snowmobile operator. He says anyone operating a snowmobile who decides to go on the ice should wear a flotation suit.

Police also want riders to learn about their machine.

“The new sleds are extremely powerful, well about a thousand CC’s and some are turbo charged.”

Potter says some of these sleds are more powerful than automobiles.

“If you are not using that power appropriately it could get you into trouble real fast.”

OPP urge riders to make use of the Ontario Federation of Snowmobile Clubs interactive trail guide and educational resources available on the organization’s website.

Police have a number of enforcement tools to ensure safety on the trails, with their own sleds, as well as drones and a helicopter.

“Don’t cut your life short for the sport.” says Potter.