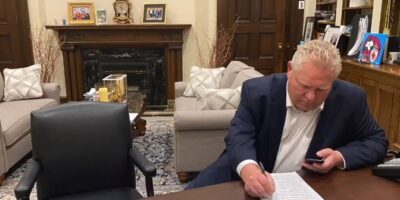 The provincial COVID-19 caseload continues trending in the wrong direction, with 441 new cases confirmed on Friday.

Testing continues to lag as well, with Ontario’s network of labs conducting 11,276 tests yesterday, short of the benchmark for a fifth straight day.

Premier Doug Ford proclaimed the province is ramping-up testing this weekend, saying if he has to make robo-calls for people to go get tested, he will.

“We’re going into senior homes and long-term care to continue testing, including asymptomatic testing,” said Ford. “We’re going hard all weekend to make sure this is happening.”

During Thursday’s media briefing Ford said he wanted to see expanded testing to include asymptomatic people.

Ford gave the Windsor-Essex County Health Unit a “way to go, Windsor” during his media briefing on Friday for implementing new mobile testing units that will conduct random community testing. The WECHC says people don’t have to show symptoms to be tested.

The Simcoe Muskoka District Health Unit’s Dr. Charles Gardner said Friday afternoon his office would watch the progress of these mobile units closely, and will follow whatever directive comes from the province, but is not currently planning on introducing mobile testing units.

Health Minister Christine Elliott says testing for kids before schools and daycares open will happen,”so long as there’s parental permission.” Elliott added that further testing of children will be required.

Some 30 countries around the world have implemented national contact tracing apps. Minister Elliott says Ontario is actively looking for the right app and one that’s going to work with the rest of the country.

Prime Minister Trudeau said earlier on Friday that the federal government is still working on that and will have more to report in the coming weeks.”

He said Apple and Google are releasing a new system within their app in June. “We are waiting on that, and we will recommend strongly one particular app to Canadians.”

Ford says the province has already received help from the federal government with testing and contact tracing. “We had a good conversation yesterday on that with the Prime Minister.”

Trudeau says they will assist provinces with contact tracing by providing federal government employees that can make 3,600 calls a day, to people who may have come in contact with someone infected with the virus.

On top of that, Trudeau says Statistics Canada has made 1,700 interviewers available, who can make up to 20,000 contact tracing calls a day.

“The impact of COVID-19 has been devastating for many business owners, workers, and families, and that’s why we are doing everything we can to help people through this difficult period,” Premier Ford in a release.

“Hospitality workers and our skilled tradespeople have been among those hardest hit by this pandemic. These new programs will ensure they’re ready to get back on the job and play an important role in our economic recovery.”

To be eligible for the new grant, apprentices must have:

“The programs that we are announcing today will leave more money in the pockets of our apprentices and support those hospitality workers who have been laid-off by providing access to the training and services they need to recover and rejoin the workforce,” said Labour Minister Monte McNaughton.

The government is also investing nearly $2 million to open a Virtual Action Centre to provide up to 7,000 unemployed workers in the hospitality sector with access to a wide range of services and supports online and over the phone, including: