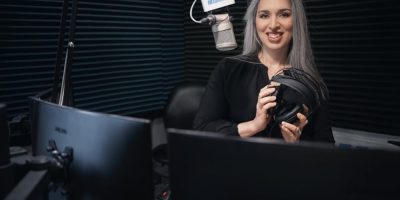 “You never know where life is going to take you. That’s what I like so much about it.”

Dick Van Dyke said that during an interview on the Rosie O’Donnell show 12-years ago.

The quote holds true not just for Van Dyke, but Lisa Morgan.

After nearly 15 years doing the midday show on KOOL FM, Lisa’s last day at the station will be on Friday, Apr. 22.

“Radio was a surprise career for me,” admits Lisa. “It was never something I wanted to do.”

In fact, Lisa landed her first radio job soon after she turned 17-years-old and did the midnight to 2 a.m. shift at Life 100.3 in Barrie. The job was part time on Fridays.

“For fun, I was thinking I would just do radio part time,” says Lisa. “I had big plans. I thought maybe I would get into politics or become a history teacher.”

Lisa actually ended up in the nation’s capital when she was accepted at the University of Ottawa and graduated in 2006 with a Bachelor of Arts Degree.

But the radio bug was still buzzing, and after graduation, she decided to ask a few people in the industry if the radio business was right for her. Encouraged to jump at the chance, Lisa landed a job announcing at BOB FM in Ottawa where she spent just over a year.

From there, Lisa returned to her hometown of Barrie and a job with KOOL FM.

“You do have to be kind of a little weird to do a job like this because you stay in a room by yourself and yet you are talking to thousands and thousands of people,” she says.

But being able to interact with listeners is something Lisa considers an honour.

“There are very specific people who get in contact every day or every couple of days, and I know they are listening,” she explains. “And not just my show, but KOOL FM. It’s a big part of their life. I have always felt a responsibility to be entertaining and honest, and hopefully, just be a good part of their day.”

For someone who is actually quite an introvert, social media added a new dimension to Lisa’s job, and while she is not the type of person to put her face out there, the instant reaction that Lisa gets from listeners on social media is very satisfying.

So, where is Lisa headed? Well, she loves politics and there is a provincial election in June.

“Not going to Queen’s Park,” she laughs.

Lisa is returning to postsecondary life at York University and wants to become a teacher.

“I have always had a desire to teach people how to write essays properly,” she says. “When I was in school I would sometimes edit my classmates’ essays. I think there is something really lovely about being able to express yourself clearly on paper. I think it’s a skill that is still very needed, especially in a world where everything is a soundbite, and in a world where there is very little nuance.”

Her midday shift has afforded her some opportunities.

“It’s been marvelous as a parent because I have been able to get my kids off to school and I pick them up after school.”

Lisa is grateful to the many listeners who have been on this journey with her at KOOL FM, some from the very beginning, and others who have hopped on for the radio ride over the years.

“Thank you for listening,” says Lisa. “I know there are people who have listened from day one and have gone with me through my journey of getting married and having kids, and I appreciate it. I don’t think I will know how much I miss it until I am gone.”