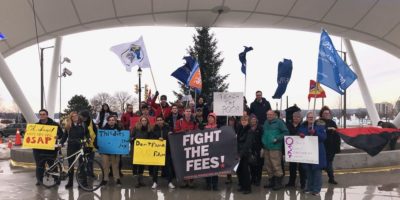 Activists braved the rain and turned out at Barrie’s Meridian Place in protest of recent provincial changes to post-secondary education.

Over two dozen gathered in the rain Monday afternoon, joining a chorus of voices across the province in protesting the cuts.

Rally organizers say the Progressive Conservative government’s changes to OSAP will impact many, including low income and international students. It’s claimed students will be saddled with thousands in additional debt without certain grants within the Ontario Student Assistance Plan.

The downtown rally was one of several coordinated showings across the province, in response to the PC government’s recent education changes. Participants in Barrie were joined by others at similar rallies, including in Guelph, Windsor, Ottawa, and at Queen’s Park in Toronto.

The government had announced it would not only eliminate some OSAP grants, it would also hew tuition costs by 10 per cent, while rally participants say that would take about $360 million away from Ontario universities, and $80 million from its colleges.

The cuts to education come as the PC government says it is trying to hew a ballooning deficit of over $12 billion.