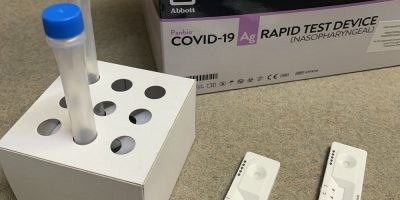 Many paramedics in Rama First Nation are getting swabbed on the daily, as part of a pilot program to test out a rapid COVID-19 test.

Carrie Hassberger, Chief of Paramedic Services in Rama First Nation, says many of her paramedics are participating in a Ministry of Health-run pilot project to test out the effectiveness of the Panbio COVID-19 rapid test. Day shift crew volunteered to get tested prior to their shift for eight weeks. “It’s completely voluntary, but so far I haven’t had anybody say absolutely not,” Hassberger told Barrie 360. “They are very selfless, my crew here, that they care more about other people than themselves right now.”

Chief Hassberger tells Barrie 360 the only difference between the rapid test and getting swabbed at a testing centre is the time. “Unfortunately, it is the same swabbing procedure as any of the COVID tests that are going on and being processed through a lab right now, where it’s a nasal pharyngeal swab that’s taken for five seconds.” She says results are ready within 15 minutes.

Patients might be able to rest a little easier knowing the paramedic aiding them is COVID-free, but the rapid test also provides comfort to the paramedics themselves. “It’s just another safety blanket, another tool in the toolbox, as I like to say, just to ensure the patient’s safety and not to mention, for the paramedics themselves, that are worried about bringing something home to their family. It just kind of gives them peace of mind to that they’re okay,” she added.

Hassberger admits the rapid test is not as accurate as those processed in a lab. “We’re cautiously optimistic because it is a pilot project. There has been some 30 percent chance of false-positive readings on them, where in that case, they would have to isolate and get an actual lab run swab.” Hassberger says, despite weeks of testing on multiple staff, no false-positive has cropped up.

The rapid test is being made available to other first responders within Rama First Nation. “We just haven’t had anybody take us up on it yet,” Hassberger concluded. “We’re in the early stages of the pilot, so I imagine probably in the new year, we will have a bit more uptake on it.”

While the pilot program must run for eight weeks, they do not need to be consecutive; Chief Hassberger says they began on December 7 and will push pause on testing over the holidays, until January 4.