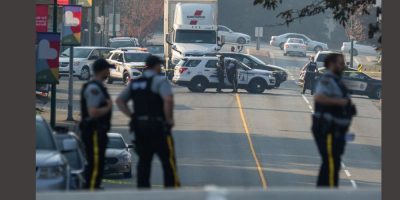 McDonald said Yang was stabbed during “an altercation” while she partnered with a city employee officer at a homeless camp site around 11 a.m. Tuesday.

She was pronounced dead at hospital.

A suspect was shot and seriously injured and remains in hospital, he said during an emotional news conference.

“Constable Yang died bravely. She answered the call to duty and she paid the ultimate price,” he said.

More details of the confrontation aren’t being released as a murder investigation continues and the police watchdog looks into the shooting of the suspect, McDonald said.

Those she worked with describe Yang as kind and compassionate, which makes her death even more difficult to accept, he said.

“Her death while on duty and in service to her community is both senseless and tragic,” he said as his voice shook with emotion.

Yang was a member of the police mental health and homeless outreach team.

“Working with mental health and homelessness can be challenging – but Shaelyn embraced it with passion. She found value working with this team and working to help those struggling in our community,” said De La Gorgendiere.

He said Yang was a loving wife, daughter and sister.

De La Gorgendiere said Yang’s sacrifice to her community will never be forgotten.

Burnaby Mayor Mike Hurley said the municipal worker who was with Yang at the time of the incident had been “deeply shaken.”

Hurley said he was “devastated” by Yang’s death, and that the thoughts of the city were with the officer’s family and friends.

Prime Minister Justin Trudeau said in a tweet he was “incredibly saddened” to hear about the officer’s killing.

“My thoughts are with the family, friends, and colleagues of the fallen officer – I am keeping you in my thoughts during this terrible time,” he said.

He expressed sincere condolences to all police officers in B.C. on behalf of members of the legislature.

“Every day we ask thousands of men and women in uniform in this province to go out and do their duty, keeping our communities safe, keeping the public safe, knowing full well it’s an extremely dangerous job.”

“Our officers worked closely with her and she will be deeply missed,” the statement said.

Federal Public Safety Minister Marco Mendicino said he was devastated by the news of the loss of the officer in the line of duty.

“At this difficult time, my heart goes out to the family and friends of the deceased officer and to the entire Burnaby RCMP Detachment,” he said in a tweet.

Police departments from Vancouver to Ottawa also expressed their sadness at the loss on social media.

The Independent Investigations Office of B.C. has confirmed it has been deployed to an incident involving police in Burnaby, but it would not confirm the stabbing or whether it involved RCMP.

The office investigates any incidents linked to police in B.C. involving serious harm or death.

Banner image: RCMP officers are seen near the site where a female member of the RCMP was stabbed to death in Burnaby, B.C., Tuesday, Oct. 18, 2022. THE CANADIAN PRESS/Jonathan Hayward