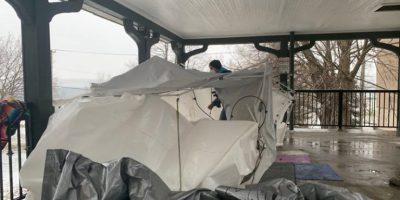 DONATE here to the John Howard Society of Simcoe Muskoka who are working tirelessly to find a stable and ongoing warming/cooling solution for those who need it.

By now you most likely heard the story about a makeshift warming centre being taken down during some very frigid winter weather.

It was created from love and compassion, built with tarps and cardboard, and heated with a propane tank.

The makeshift warming shelter was built under the gazebo at Sam Cancilla Park.

City officials had been monitoring it for about a week, for safety reasons.

Then on January 9th, the temporary structure was taken down.

This struck a chord.

It actually became one of the very rare times in recent memory that a story supplanted Covid-19 in the news cycle.

A good question to ask is how in 2022 there’s no warming centre for Barrie’s homeless community during the frigid winter nights?

The answer is not that simple.

There are plenty of options and plenty of great people doing great things to help Barrie’s homeless community.

Look no further than the Salvation Army or the Busby Centre.

Both house those who want it, but not everyone living on the streets wants it.

And then there are capacity issues as well.

There are more options for those escaping the cold, but those are mostly run during the daytime.

This is why Andy Stokes, known within the homeless community as Pastor Andy, created the makeshift warming centre.

That’s the backstory to what seems like a very fixable problem.

So here’s what the City, church leaders, community organizations, and volunteers are doing to fix it.

A day after Barrie Police took down the makeshift shelter, the city put up $20,000 in funding for the John Howard Society of Simcoe and Muskoka and the Gilbert Centre.

This would be used to help address the problem over the remaining winter months.

The City has also asked the County of Simcoe to match the money.

“I was at City council for another reason, and I heard this being discussed and I thought how is this possible in Barrie in 2022?”

Hill then spoke with the John Howard Society about helping out.

“I quickly realized that a $10,000 donation I was providing to them, while extremely important and significant to the staff there, was just another band-aid solution,” Hill said.

She then publicly challenged other real estate agents in the Barrie area to join her cause.

“We need less talk and more action,” she said. “It’s freezing out here, no one should have to suffer in this extreme cold, it’s just not right.”

Hill then created a fundraising campaign, to help the John Howard Society staff a permanent solution.

“We need everyone, even the general public, to just help out …. be it a dollar or two … and we can easily get this thing done,” Hill said.

There are around 100 people sleeping outside on any given night in the city of Barrie.