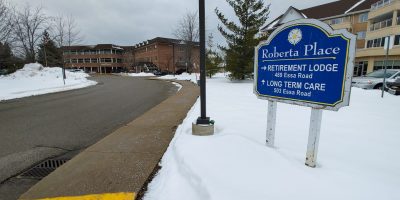 An outbreak at Roberta Place long-term care home in Barrie was first declared on January 8. Since then, all residents of the home have contracted the virus, while 69 have died from it.

According to a Roberta Place spokesperson on Monday, all 129 residents of the home contracted the virus throughout the outbreak, but adds three of those are listed as “probable.” Additionally, 69 deaths have been reported at the home since the outbreak was first declared 31 days ago. The last death at the home was reported on February 2.

To date, there have been 105 cases of COVID-19 reported among staff at Roberta Place. Of those, 13 remain active, but the home reports there is not a single active case among the residents of Roberta Place, and there hasn’t been a new case reported among them since January 27.

The Simcoe Muskoka District Health Unit has since confirmed the outbreak at Roberta Place involved a faster-spreading variant of the virus, known as B.1.1.7.; the health unit has since identified 128 cases of the variant in the region.

Roberta Place recently announced it would be defending itself against a class-action lawsuit brought by families of residents of the home; the $50 million suit is based around an unproven statement of claim filed in the Ontario Superior Court of Justice alleging Roberta Place failed to take basic precautionary measures to protect against COVID-19.