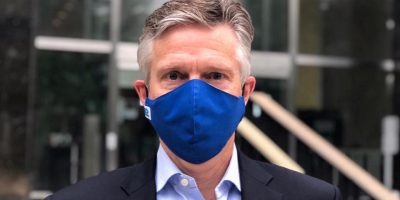 Phillips told reporters he made a “dumb…dumb” mistake.

“Obviously, I made a significant error in judgment, and I will be accountable for that,” Phillips said.

“Today’s resignation is a demonstration that our government takes seriously our obligation to hold ourselves to a higher standard, Ford wrote.

Current Treasury Board President Peter Bethlenfalvy to assume the role of finance minister.

Ford said Wednesday that it’s “unacceptable” for any public official to ignore the province’s COVID-19 guidelines.

The CBC reported that Phillips also took a trip to Switzerland in August.

Reporters also asked Phillips about social media content that his office posted while he was vacationing that could be construed as disingenuous.

The video below was posted on Christmas Eve.

It’s #ChristmasEve. To my constituents in #Ajax & people across Ontario, all the best during this special time of year. Even as COVID-19 changes how we celebrate, we should reflect on what makes Christmas so special to us – including family & the act of giving. #MerryChristmas! pic.twitter.com/AX7hKWA88n

He said it’s typical for politicians to schedule tweets ahead of time.

Phillips becomes the latest politician to eat his own words after urging citizens to wear a mask, stay 6 feet apart, and stay home.

Quebec Liberal MNA Pierre Arcand took a trip to Barbados for the holidays.

Saskatchewan cabinet minister Joe Hargrave flew to Palm Springs over the holidays to finalize the sale of a home.

South of the border, California Gov. Gavin Newsom, the first to issue a statewide stay-at-home order in the U.S., was caught dining mask-less with a group of 10 people that included lobbyists.

The AP also reported that San Francisco’s mayor, London Breed, was at the same $350-a-plate restaurant a day later, dining with a San Francisco socialite and six others.

Austin, Texas, Mayor Steve Adler was in Mexico with family in November. and the mayor of Denver, Michael Hancock, travelled to Mississippi for Thanksgiving while he told others to stay home.