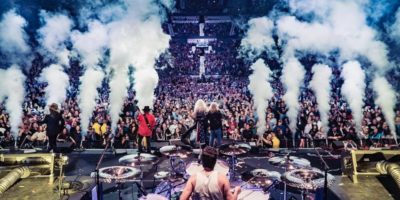 The organizing forces behind Roxodus have cancelled the July 11th concert outright. A Facebook post on the Roxodus Facebook page indicates the refund process is still being worked out.

During the past couple of months, our venue at Edenvale Airport has battled tremendous rainy weather that has impacted our ability to produce the festival. It is with a heavy heart that we announce the cancellation of the Roxodus Music Festival this year. Our team has worked tirelessly to find a solution in which the show can go on but unfortunately, we could not make it happen this year. Our dream of producing a ‘once in a lifetime experience’ has been put on hold as we take the much-needed time to nurture our venue into a premier landmark in Ontario. We sincerely thank all of the artists, sponsors, partners, and neighbors who have supported us from the very beginning.The embrace from our community has meant the world to us and we hope to one day see our dream come to life. Information about ticket refunds will be released shortly.

MF Live is citing concerns over the suitability of the Edenvale Aerodrome as justification for cancelling the show. An email to Barrie 360 indicates the “600 acre property has experienced so much rain that continuing was unfeasible”.

There is no information on refunds, while the Roxodus website, as of Wednesday morning, indicated there would be no refunds for any reason. Tickets started at $129 for a one-day general admission, with camping packages costing as much as $1,600. It is said only about 20,000 tickets have been sold.

The show originally promised a massive line up of rock music, including Aerosmith, Alice Cooper, Kid Rock, Nickelback, and Lynyrd Skynyrd, and a host of local talent. Performers were paid up front.

Related: Police reportedly look into a complaint against a member of MF Live

MF Live just recently secured the permit and special zoning to hold the concert from Clearview council on June 19th, which would have allowed Roxodus or a similar concert to be held on the grounds for two years.