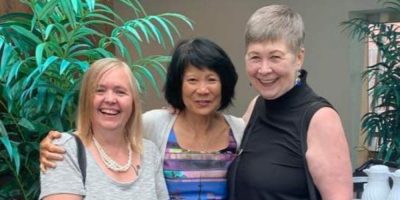 Ryan’s Hope, a Barrie organization that supports vulnerable people in the community, was recently acknowledged for the work it does.

The organization was founded by Christine Nayler and her husband, Tom, in memory of their son, Ryan, who died from an overdose in November 2020 at age 34.

On Monday, Nayler was awarded the Jack Layton Activism Award, and shared her thoughts on the moment when she found out the news.

“It was just unbelievable,” Nayler told Barrie 360. “It’s such a huge honour. If we got one hundred more awards, I think this one would still just be so special in our hearts, because it’s the Jack Layton legacy award. And he was such an inspiration to Ryan, and to myself, and my husband.”

She says she still remembers a moment they were really excited about as a family and talked about for years later.

“Jack’s election,” said Nayler. “That night rally when he made history and was leader of the Official Opposition, Ryan was living in Toronto at the time and he talked us into coming down because he’s like, ‘No, this is going to be worth it. You got to come down.’ And we came down.

“We never regretted that we did and that we got to be a part of that amazing evening because of just the energy of love and hope that was in that room. So, it has a deep, personal meaning the award.”

Nayler says their mission is to advocate for, and support, people living with mental illness, substance use issues, and experiencing homelessness.

“Those three issues are really interconnected,” said Nayler. “And it’s really hard to address one of them without looking at the root causes of all of them, and how they interconnect.”

Nayler added that she hopes this acknowledgment shines more light on the issues they’re tackling.

“We need more people doing similar types of work,” said Nayler. “Our most vulnerable, and the people that need our help the most, are the ones that we’re failing in so many tragic ways. And we’re losing, we’re losing Canadians.