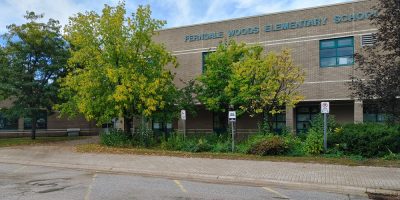 Police are investigating after it appears broken glass was intentionally placed in an elementary school sandbox.

Barrie Police spokesperson Peter Leon tells Barrie 360 glass has been found in the sandbox of Ferndale Woods Elementary School a number of times now. “There was a discovery of glass in the kindergarten playground area late last week. And from the report that was received by the Barrie Police Service, we have information that daily discoveries have been made,” he said.

There have been no injuries reported as a result of this act, while Leon says the broken glass is being placed in a way that, if someone were to step on it with soft-soled shoes, a significant injury could occur.

Leon was asked if this is some misguided prank or something more sinister. “It’s hard to say. But we’re dealing with a playground that is occupied and used for kindergarten-age children. We can appreciate that somebody may have some issues or concerns with respect to kids being outside and playing and doing what kids do, but they’re at a school and this is a place that has been segregated off in areas of safety for children to be able to play.”

“Now this area, that has been set aside specifically for the younger children, can’t be used until the sand is replaced,” he said, adding arrangements were being made by the school to replace the affected sand.

“We’re appealing to the public: if anybody has information, they can contact us, or they can contact Crimestoppers and remain anonymous,” Leon concluded. “This is inexcusable. There’s no place for this in our society.”