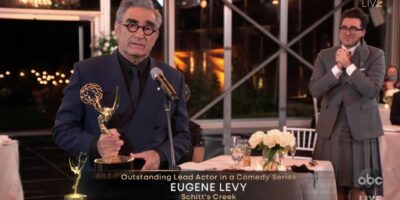 The Schitt was hitting the fan for all the right reasons on Sunday night! Beloved Canadian comedy series Schitt’s Creek swept the comedy categories at The Emmy Awards, taking home all the big awards of the night. All four of the series leads took home acting trophies. Eugene Levy and Catherine O’Hara won for their leading roles, while Annie Murphy and Dan Levy took home supporting actor nods. Dan Levy also won for outstanding writing and outstanding directing in a comedy series, along with the show being named best comedy.

Schitt’s Creek had 15 nominations this year, making it the second most nominated show behind The Marvelous Mrs. Maisel. The show won two Emmy’s earlier in the evening for costuming and casting. Their nine wins made Emmy history – setting a new record for most wins in a single year for a comedy series.

#SchittsCreek sets an #Emmys record for most wins in a single season for a comedy https://t.co/uECg2EEfvh pic.twitter.com/MJPO30wYld

Last year the show had four Emmy nominations but did not win any awards.