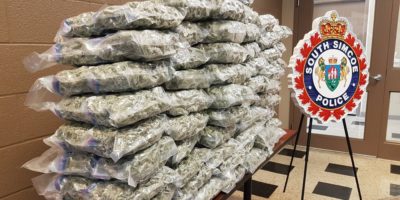 The Luck of the Irish was not with these guys, but at least they had some green on them.

South Simcoe Police stopped a van at a St. Patrick’s RIDE spot check over the weekend, said to contain about 64 pounds of pot.

Officers say when the vehicle was stopped at the intersection of 4th Line and Reivie Blvd. in Innsfil around 7:00 Saturday night, and that an “overpowering odour of fresh cannabis” was immediately detected. A search of the vehicle turned up about $250,000 in marijuana, far beyond the 30 gram limit under legalization.