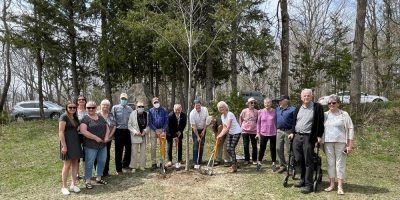 Nearly one hundred years ago, past County of Simcoe Warden J.J. Banting, and provincial and municipal representatives, planted the first tree seedlings in the Hendrie Tract, which would grow into the Simcoe County Forest.

On Tuesday, May 10, Warden George Cornell, county councillors, forest officials, and members of the Drury family attended a ceremonial tree plant at the E.C. Drury Cairn, to honour the occasion.

Graeme Davis, County Forester for the County of Simcoe, says if someone looked around at that location one hundred years ago, there would be very few trees on the landscape.

Davis also noted that former Ontario Premier E.C. Drury, and Simcoe County and Oro-Medonte resident, was a key figure in the forest’s growth.

“E.C. Drury was one of the significant contributors that said, ‘This isn’t working. We need to put some forests back,’” said Davis.

“That’s when the County Forest was initiated and other reforestation programs on private lands followed. But there was a huge investment made over decades to bring us back from the brink of desertification in this part of the world.”

As well, a bench was made in honour of the anniversary.

The bench will be travelling around Simcoe County, eventually staying on the porch of the Red Pine Porch at Simcoe Museum.

Simcoe County Forests was recognized as the Forest Capital of Canada for 2022 by the Canadian Institute of Forestry. This is the second time they have been recognized, and are the first-ever two-time winner – the first time was during their 60th anniversary in 1982.

When asked about any specific projects happening in 2022 or the near future, Davis says there’s always something new on the horizon.

“We continue to try to expand the land base and are always looking for opportunity,” said Davis. “That’s one of the things that’s most unique about Simcoe County that people don’t realize…we continue to invest and grow.”