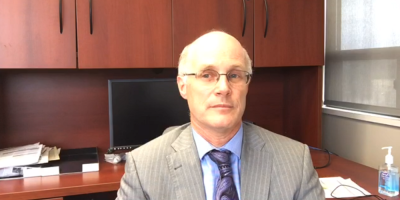 For the first time since the pandemic began, the transmission rate of COVID-19 in Simcoe Muskoka is outpacing health units in the Greater Toronto Area.

“I do want people to be fully aware of the fact that we’re among a number of health units in the province who have had a surge in cases,” said Dr. Charles Gardner, Simcoe Muskoka Medical Officer of Health.

“The province as a whole has remained at a relatively low level of transmission, and this is certainly true in the Greater Toronto Area. We have nearly as many cases occurring so far in November as occurred in September and October combined.”

Also, a first in this pandemic, the transmission rate in Muskoka is higher than in Simcoe County.

Gardner said health units in Kingston, the St. Thomas area, Sudbury, and Algoma were also experiencing a spike in infections.

Kids 5 to 11 in Simcoe Muskoka can get the first dose of Pfizer vaccine beginning on Friday at community clinics run by the health unit. Vaccines will also be provided at participating pharmacies and some primary care settings.

As of Wednesday, over 6,750 children ages 5 to 11 in Simcoe Muskoka are booked in the provincial system to receive their first vaccine, out of the 44,000 children in that age bracket who live in the area.

“We would be able to provide vaccination for our entire local child population within a three-week period to get the first dose,” said Gardner.

He repeated that immunization is the single most important thing a person can do to protect themselves against COVID-19.

During the week of Nov. 12, 38 per cent of cases in Simcoe Muskoka were among the fully vaccinated compared to 30 per cent the week prior. Gardner said that stands to reason.

“We will expect the percentage to go up over time as we move towards achieving an even higher coverage in the eligible population. As you move towards 100 per cent coverage, the only cases that can occur under that circumstance would be breakthrough cases.”