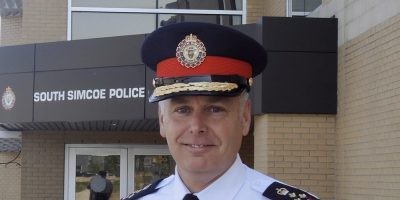 Chris Gariepy Chair of the Bradford West Gwillimbury/Innisfil Police Services Board announced today that Chief Andrew Fletcher will retire from the South Simcoe Police Service at the end of September after more than 38 years of dedicated service in policing.

“On behalf of the Board, I want to thank Chief Fletcher for his dedication and leadership to the communities of Bradford West Gwillimbury and Innisfil,” said Chair Gariepy. “Since assuming the role of Chief at the South Simcoe Police Service in 2017, his vision, passion and strong commitment to community policing has been instrumental in the growth and modernization of the service.”

Chief Fletcher began his policing career in 1984 with the Halton Regional Police Service, and over the next 31 years enjoyed a variety of assignments in uniform patrol, with the tactical team, criminal investigations, drugs and morality, and the homicide unit. In 2007, he was promoted to Deputy Chief of Halton Police and spent eight years overseeing both Operations and Administration.  Chief Fletcher joined the South Simcoe Police as Deputy Chief on June 1, 2015 and was promoted to Chief of Police in May of 2017.

During his tenure as Chief of Police, Fletcher implemented countless initiatives focusing on Community policing including expanding the number of front-line officers, civilianization of specialized roles such as corporate communications and community liaison, and the historic appointments of the service’s first female Deputy Chief and Inspector. Chief Fletcher focused on the use of technology to enhance safety such as the recent body worn camera initiative, and has introduced a variety of clothing and equipment enhancements to the service. In addition, to recognize the value, diversity and excellence of service members, the Chief introduced an annual employee recognition and awards ceremony, and was instrumental in supporting the service’s first PRIDE celebrations and community engagement initiatives.

Among his many roles, Chief Fletcher served as a Vice President with the Ontario Association of Chiefs of Police (OACP), is Co-Chair of the OACP Community Safety and Crime Prevention Committee, and is Chair of the OACP Law Enforcement Torch Run Committee, and is a passionate supporter of Special Olympics campaigns that support and promote the athletes that are near and dear to his heart. Chief Fletcher actively volunteered within the community as co-chair of the Simcoe County Local Immigration Partnership Council, as a member of the Simcoe Muskoka Opioid Strategy, and as a member of the Innisfil Rotary Club.

Chief Fletcher is a graduate of the FBI National Academy and is a recipient of the Queen Elizabeth II Diamond Jubilee Medal, and the Governor General of Canada Order of Merit of the Police Forces.  In 2019, he was inducted into the Canadian Society of Evidence-Based Policing Hall of Fame. He has also been instrumental in the development of a Community Safety and Well-Being plan for the County of Simcoe.

The Bradford West Gwillimbury/Innisfil Police Services Board is proud of Chief Fletcher’s exceptional leadership, especially during the challenging, unprecedented times of a pandemic, and for ensuring the Services focus on community policing has been maintained.

“I am extremely proud of the South Simcoe Police Service and am grateful for the opportunity to lead this amazing team. Together we have made this a top notch, well respected Police Service, ready to meet whatever lies ahead,” said Chief Fletcher. “I would also like to thank the communities of Innisfil and Bradford West Gwillimbury, Mayors Dollin and Keffer and Town Councils for their trust, respect, and support. And of course to Chair Gariepy and our amazing Police Services Board, both present and past, thank you for believing in and supporting the vision – together we have made this police service what it is today. Although looking forward to retirement and my next chapter, I leave knowing the police service is in a good place with a bright future, ready to meet the needs of our growing communities.”

Chief Fletcher’s final day is September 30, 2022.  The process to select a new police chief is underway with further details to be announced.