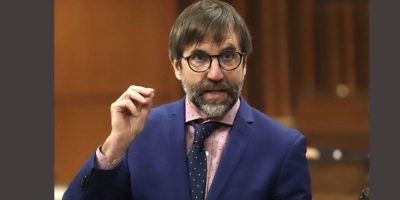 Canadians will need to find alternatives for plastic straws and grocery bags by the end of the year as the federal government puts the final motions in place to ban some single-use plastics.

Environment Minister Steven Guilbeault and a number of other ministers and Liberal MPs will lay out the plastics ban in a series of events across the country today.

Guilbeault is also expected to discuss plans to mandate a minimum amount of recycled content in other plastic items as the government seeks to create a bigger market for recycled plastic in Canada.

The draft regulations to ban six plastic items were published in December and the government has to have at least a six-month long phase-in period once the final regulations are published this month.

Only six specific manufactured plastic items will be affected by the initial ban, after the government determined they were hard to recycle but have easy alternatives.

The move comes almost three years after Prime Minister Justin Trudeau first promised that his government would phase out the production and use of hard-to-recycle plastic items as it aims for zero plastic waste by the end of the decade.

Initially he said the ban would happen in 2021, but the scientific assessment of plastics that was needed to put the ban in motion was delayed by the COVID-19 pandemic.

Following that assessment, which was finalized in October 2020, the government designated manufactured plastics as toxic under the Canadian Environmental Protection Act.

That designation was needed before any items can be banned.

A coalition of plastics makers sued the government over the designation in May 2021, with the case expected to be heard sometime this year.

Plastic waste has been a growing problem around the world, with an estimated 10 per cent or less of most manufactured plastic recycled.

A research study published by Environment and Climate Change Canada in 2019 found 3.3 million tonnes of plastic was thrown out, almost half of it plastic packaging. Less than one-tenth of that was recycled. Most of the plastic ended up in landfills, where it will take hundreds of years to decompose.

Newfoundland and Labrador, Prince Edward Island and Nova Scotia already took their own action against plastic bags as have some cities including Regina and Montreal.

Some retailers also moved faster than the government, with Sobeys eliminating single-use plastic bags at its checkout counters in 2020, and Walmart following suit this past April.

Banner image: Environment and Climate Change Minister Steven Guilbeault rises during Question Period in the House of Commons on Parliament Hill in Ottawa on Friday, June 17, 2022. Canadians will need to find alternatives for plastic straws and grocery bags by the end of the year as the federal government puts the final motions in place to ban some single-use plastics. THE CANADIAN PRESS/ Patrick Doyle