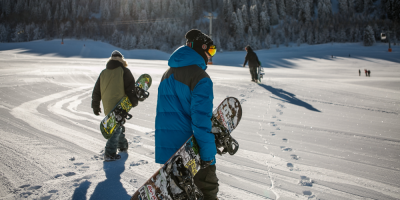 There is likely not a snowball’s chance in hell ski resorts will be allowed to return to business before the provincial lockdown is supposed to end on Jan. 23.

With COVID-19 cases consistently over 3,000 a day and new modelling numbers to be released this week that Doug Ford has said are scary, the ski industry finds itself in an uphill battle to convince the premier and health officials to let people go downhill.

“The last thing that’s on my mind right now are the ski hills,” said Ford, when asked by a reporter from Kenora last week if the government had given consideration to at least opening resorts in northwestern Ontario where there are fewer COVID cases.

Dwyane Cardoso, a snowboarder and skier from Bradford, has garnered over 85,000 signatures on a petition lobbying the Ontario government to ease restrictions and to allow ski resorts to operate.

Like driving into a whiteout, the ski industry was blindsided when the government included downhill skiing and snowboarding as off-limits when the lockdown began on Dec. 26.

The Ontario Snow Resorts Association (OSRA), which represents 50 alpine resorts, estimates the impact of the lockdown will cost the ski industry $90 million and more than 9,000 jobs.

Losing the Christmas season was a real blow to resorts, which count on the holidays for 30 per cent of their revenue. The OSRA reminds people that resorts also lost the March Break when the decision was made to be responsible and close when the pandemic began to gain a stranglehold in the province.

Pushed again by reporters last week to justify the province’s closure of ski hills, the only place in North America where you can’t go skiing at a resort, the premier remained firm.

“What I wouldn’t want to see is people in the hot zones, there’s a lot of skiers, snowboarders here (GTA) that would travel up there to get away, stay in a hotel, have some meals and so forth,” said Ford. “We need to avoid travelling.”

The frustration from the OSRA, explained executive director Kevin Nichol, is that resorts developed best practices that were given to the government back in August and September.

“It’s going to be curious to see what the government feels we need to change,” said Nichol. “We felt our protocols were in line with what every other jurisdiction in North America was doing, and they’re all operating.”

With the province in lockdown, getting outdoors has been encouraged by health officials, especially for a person’s mental health during these challenging times.

“I understand it’s great mental health,” said the premier when asked why downhill skiing was relegated to the sidelines compared to other winter activities. “Maybe go cross-country skiing with a family member. Get outdoors. I agree that mental health is an issue, but health overall is so important right now.”