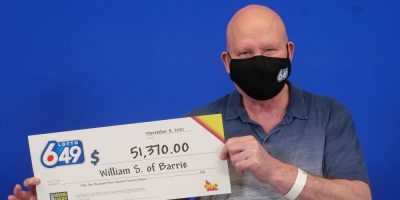 William said he is a regular lottery player. “I’ve been playing since the early days of Wintario but this is my first big win,” he shared while at the OLG Prize Centre in Toronto to pick up his winnings.

The 66-year-old retiree says he was shocked when he discovered his big win. “I just sat down at home and looked at the winning numbers print out I got from the store. When I saw the numbers matched, I was so excited. I was only one number away from the jackpot!”

William shared the news with his brother right away. “I said, ‘Now it’s your turn, brother!'” he smiled.

William says it feels great to win this cheque. “I plan to invest it for a nice retirement. I will put it away for now and make decisions later,” he concluded.

The winning ticket was purchased at Circle K on Leacock Drive in Barrie.