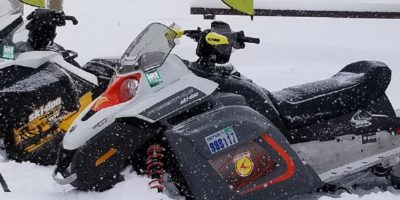 Slim pickings for riders who want to take their snowmobile for a spin on a marked trail.

“The late onset of cold temperatures and lack of snow in many parts of Ontario have set a particularly dangerous stage for snowmobilers, especially those who are considering riding on frozen waterways,” the Ontario Provincial Police said in a news release to mark the start of Snowmobile Safety Week on Saturday.

Close to 40 per cent of OPP-investigated snowmobile fatalities have occurred on frozen lakes and rivers over the past 10 years.

“Snowmobilers are therefore urged to avoid all frozen waterways at all times,” police said in their news release.

OPP say speeding, driving too fast for the conditions and alcohol/drug impairment are the leading causes of snowmobile fatalities.

“Snowmobilers are reminded that the conscious choice to include these (and other) risks in their ride – more so than the risks themselves – make snowmobilers their own worst enemy when tragedy strikes,” said police.

The majority of the 30,000 kilometres of trails managed by the Ontario Federation of Snowmobile Clubs (OFSC) are unavailable and snowmobilers who use them are trespassing.

There are no open OFSC trails in Central Ontario.

If you need a fix and want to go riding, the longest stretch of open trail runs between Cochrane and Hearst, while there is mostly limited availability in parts of Algoma, the Pembroke and Bancroft area, Thunder Bay, and sections of northwestern Ontario.

Riders can get OFSC trail information at Interactive Trail Guide.