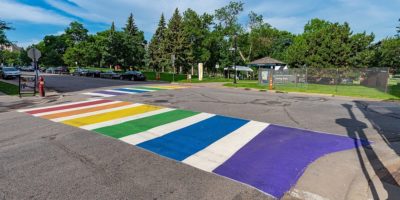 The City of Barrie is committing seven grand towards a rainbow crosswalk, a move being highlighted as a gesture to the LGBTQ+ community.

Monday night’s City Hall meeting saw council approve a motion to have the crosswalk installed across Simcoe Street at Meridian Place in downtown Barrie, at a cost of $7,000.

Some around the council table balked at the project, not for its social significance, but rather the cost. Councillor Robert Thomson was the first to raise concern, asking if a private donor could be found to fund the crosswalk “The $7,000 funding for one crosswalk, I could be off by a little bit, but translates to almost a kilometer of 10cm solid white markings for a bike lane. I just think that when you hear things like ‘cash strapped city, with luxury items like tennis and wifi’, I think the optics of it would not look good upon us.” He went on to suggest that another private source of funding could be found, citing the Barrie BIA or an angel donation.

Councillor Keenan Aylwin, who authored the motion, said the crosswalk would be a good gesture on behalf of the city. “This is a gesture that I think is long overdue and is very important.” said Aylwin at Monday’s meeting. “Growing up in Barrie as a closeted gay kid, it’s not easy. I think the $7,000 is worth signaling to even one kid who may be struggling with their sexuality, that you’re loved, you’re accepted, that you have a place in this community.”

Councillor Clare Riepma questioned why council was even debating the cost in the first place “I think it was half an hour ago we were discussing our master plans, and we agreed that the expenditure would be $3 billion over the next few years, and now we’re talking about seven grand? This is… we shouldn’t be talking about this, this should be a slam dunk.”

A motion put forward by Councillor Mike McCann to see the project go ahead with a private funding source was voted down 6-5.

This crosswalk comes by way of a petition from the LGBTQ+ community in Barrie, according to Aylwin, and is expected to be installed before August 1st of this year.