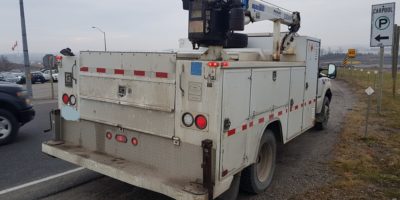 South Simcoe Police stopped a work truck on the way to a job today, but they may not have made it there all things considered.

When police pulled it over on the Highway 88 ramp to the 400 this morning, they say the truck barely had any brake pads left.

Three of four were worn down to the nub, while officers claim the emergency brake didn’t work at all, broke as soon as they tried it.

Commercial Motor Vehicle stop in #Bradford. Three of 4 brakes look like this one in the photo. The emergency brake didn’t work at all and broke on application! Plate removed and driver and company charged. #RoadSafety pic.twitter.com/YFOD3NbEUy

The South Simcoe Police Service says the driver and the owner of the company have both been charged. Those charges include Failure to Enter Defect in Daily Report, Improper Braking System, and Motor Vehicle without Inspection. All told, about $1,200 in fines.