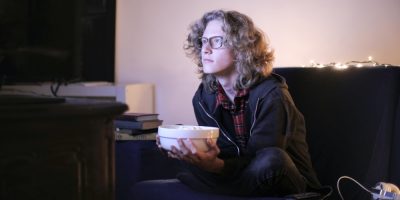 We already tackled two of the other big streaming services so let’s dive into Disney Plus for some scares! While there will be a few light scares on this list (it is Disney, after all), don’t think for one second there aren’t a couple of terrifying ones! Here are a few of our favourite spooky movies you can stream right now on Disney Plus.

See? We told you it wouldn’t all be kid’s stuff.

The crew of a spacecraft, Nostromo, intercept a distress signal from a planet and set out to investigate it. However, to their horror, they are attacked by an alien which later invades their ship.

The mother of all Sci-fi horror movies, Alien is just as scary now, as it was when it was first released in 1979. There’s a reason just about everyone knows what a Xenomorph is (okay, maybe not the name, but you definitely know what it looks like). If you haven’t built up the courage to watch it yet, we think this October is the perfect time to dive into this horror masterpiece.

It’s got Jeff Goldblum and Geena Davis. What more do you need?

Seth, a brilliant scientist, is elated when he successfully manages to teleport himself in his own invention, a transportation machine. But, unbeknownst to him, he was not alone during the process.

Director David Cronenberg is not exactly a lightweight when it comes to horror and The Fly is definitely proof that he is a master of the genre. Oh, and he happens to be from Toronto too! Hooray for Home-grown Spooky Movies!

Mysterious deaths surround an American ambassador. Could the child that he is raising actually be the Antichrist? The Devil’s own son?

Talk about back-to-back-to-back masterpieces. We have an idea for you: Turn off all the lights, lock the doors, pop some popcorn, and get a horror movie marathon going this October. Capping off the night with The Omen is a sure-fire way to get absolutely zero sleep that night.

Let’s lighten things up a bit.

A couple decides to visit a mansion that Edward Gracey wants to sell. However, they soon discover that the property is haunted by evil spirits.

It’s certainly not one of the greatest spooky movies ever made, but The Haunted Mansion has a charm to it that is perfect for a family movie night this October. If your kids love Disneyland, it’s a safe bet that they will also love this movie based on the world-famous ride.

We’ve all heard of it, but have you actually seen it yet?

A newly engaged couple have a breakdown in an isolated area and must seek shelter at the bizarre residence of Dr. Frank-n-furter.

The sets are ridiculous, the acting is over the top, the costumes are insane, and the plot is ludicrous, but that’s what makes it so darn fun. Definitely filed under the “so bad, it’s good” category, it won’t take long before you’re singing along and quoting the more iconic lines in The Rocky Horror Picture Show.

You didn’t think we forget to cheat again, did you?

An anthology series focusing on different characters and locations, including a house with a murderous past, an insane asylum, a witch coven, a freak show circus, a haunted hotel, a possessed farmhouse, a cult, the apocalypse, a slasher summer camp, and a bleak beach town and desert valley.

What’s cool about this one is that each season of American Horror Story is its own unique plot, so there’s no need to watch it in order. Just pick your favourite horror themes and start on that season!

Related Local News: Celebrate The Halloween Season With 7 Scary Things To Do in Barrie

Do you still need a few more things to watch? Be sure to check out our other list of favourites on Netflix and Prime Video.