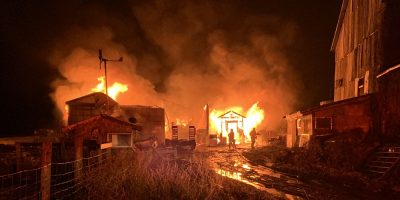 No injuries to residents or livestock following a barn fire in Springwater Township late Wednesday night.

Fire crews were called to a property on Flos Rd. 5 near Crossland Road around 11 p.m. to find an 80×50 barn fully engulfed. Springwater Fire Chief Jeff Kirk says the blaze did about $300,000 in damage, adding the barn was used to store bales of hay and other farming impliments.

There were no animals in the barn, they were in an adjacent structure that was untouched by flame. “We got lucky with the wind,” Chief Kirk told Barrie 360 Thursday afternoon.

What started the fire remained under investigation as of Thursday, but Chief Kirk says a cause may never be known as the damage was too extensive.