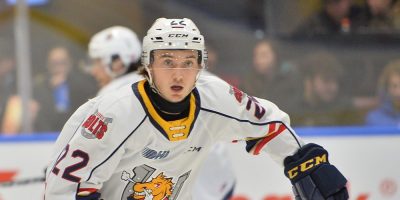 Owen Beck picked a pretty good time to show why he’s one of the top prospects heading into this year’s NHL Entry Draft.

The rookie forward scored 12:03 into the first overtime on an impressive solo effort to give the host Mississauga Steelheads a 2-1 win over the Barrie Colts, Sunday afternoon, at Paramount Fine Foods Centre.

Listed 19th among North American skaters on the NHL Central Scouting’s mid-term rankings, Beck made sure the Colts didn’t return home with a 2-0 lead in the series.

The six-foot, 190-pound Steelheads’ second-round pick fought past Barrie’s Oliver Smith and Ian Lemieux at the blue line, cut into the slot and ripped a shot over the blocker of Colts goalie Mack Guzda for the second overtime winner in the series.

“Yeah, nice goal,” said Colts head coach Marty Williamson of Beck’s winner. “I give a lot of credit to the kid, he made a good play.”

The Colts came close a couple of times in overtime to taking a series stronghold. On their best chance, Tabak was all alone in front but couldn’t get his stick on it.

“We had our chances,” said Williamson. “We had a couple of odd-man rushes there and we just couldn’t quite execute. It’s that kind of series. It’s one goal one way or one goal the other way.

“We both scored power-play goals to make it a 1-1 game and there’s not a lot of room out there five-on-five.”

Unlike in Game 1 on Friday when there were plenty of scoring chances and both goalies were forced to make big stops, checking was much tighter in Sunday’s contest.

Quality chances were rare in this one.

“Every inch of the series is going to be a battle,” said Colts forward Tyson Foerster, who set up Cooper Matthew’s equalizer at 8:49 of the third. “They’re four (seed in Eastern Conference), we’re five, so we’re just going to try and get guys in front of (Steelheads goalie Roman Basran) and hopefully get a couple past him.

“Guzda is standing on his head and we just need to play better.”

This one was more like a chess match, where neither side wanted to make a mistake that cost them the game.

The game was scoreless until late in the second period.

“It’s that tight of a game,” said Williamson. “When you play two games like this, it puts it in everybody’s head and we still got to make plays. I thought our third period was a good period. Our shot count was up, we had 14 shots. We were moving our feet and making some plays.

“You can also play too safe and that doesn’t work for you either.”

Mississauga’s power play came through with just 3:09 remaining in the second period.

Kasper Larson, from the point, fed Ty Collins at the side of the goal and the Steelheads winger turned and fired. His first shot was stopped, but Collins pounced on his own rebound and shovelled it past Guzda.

With only 13 shots through the first 40 minutes, the Colts picked it up in the third and fired 14 at Basran.

They were rewarded on the power play. Declan McDonnell dropped it back to Foerster at the top of the faceoff circle and the Philadelphia Flyers prospect walked in before sliding it back to Matthews in the slot and the first-year winger fired it past the right pad of Basran.

“I think we needed the power play to do something there,” Foerster said. “It was a big power play at the end and we were able to capitalize. The third period we played our best hockey and we just need to bring that to overtime. We obviously didn’t, so we lost.”

Midway through the overtime, the Steelheads thought they had won it when Guzda was bulled over and Innisfil native James Hardie swooped in to knock the loose puck into the net, but the goal was called back on goalie interference.

A little more than two minutes later though the Steelheads would get the winner on Beck’s great effort.

“We’re both kind of analyzing each other and keeping it as tight as we can out there,” said Williamson. “Again, we had our chances and we just don’t make plays and their guy makes a play. That’s what it comes down to in a series like this right now, who can make the play.

“We had the one three-on-two and I think Tabak had one in front of the net and just couldn’t quite get a stick on it.”

Williamson knows with the quick turn around there’s no room to dwell on this loss.

“Nope,” he said. “We came in here and took a game. We would have liked to take two, but we got home ice and if we don’t lose at home then we don’t lose the series.”

The Colts lost another forward before the puck even dropped. Standout rookie centre Beau Jelsma didn’t dress and is listed day-to-day with an unspecified injury.

“We would have liked to have Jelsma out there, but unfortunately he’s not quite ready to go,” Williamson said. “We got good contribution from our bottom two lines and we didn’t have to shorten our bench too much.”

Foerster loves the back-to-back games in the playoffs.

“We just got to bear down and hopefully we can get the win (Monday).

ICE CHIPS: Mississauga outshot Barrie 42-32. . . The Colts were 1-for-3 on the power play, while the Steelheads finished 1-for-2. . . Barrie won just 26 of 67 faceoffs. . . Rookie centre Zach Wigle replaced Jelsma in the lineup. Brant Clarke, Roenick Jodoin, Kevin Nidenz, Ryan Del Monte and Ben Pickell were the other Barrie scratches. The Steelheads had their full lineup in. . . Game 4 of the series is back in Barrie on Wednesday night.