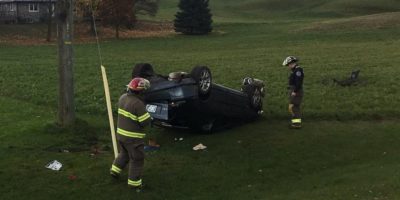 A 29-year-old man from Niagara Falls is facing a slew of charges, after a stolen vehicle was involved in a fail to remain crash on Saturday.

The collision happened on Highway 89 near 10th sideroad of Innisfil around 2:00 Saturday afternoon; police say the vehicle, which was reported stolen from Niagara Falls Friday, left the road crash into a hydro pole some 25 feet off the ground. The driver is said to have crawled out and ran off.

The same driver was allegedly found later that evening knocking on doors in the Gilford Rd. area. He was first treated for minor injuries by paramedics, before being charged with, among others, Dangerous Driving, Holding a G1 Licence Unaccompanied By Licenced Driver, and Obstructing Justice.