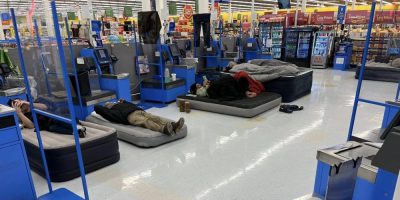 A quick errand to Walmart turned into an overnight adventure for dozens of shoppers in southern Ontario when whiteout conditions meant they couldn’t leave the store, and employees pumped up air mattresses and set up a buffet with deli food for the unexpected guests.

“The cars were in ditches. Some of them were broken down in the middle of the road. No one could get past,” said Heather Nickoli about the conditions in Chatham−Kent, Ont., on Friday afternoon.

Nickoli and her boyfriend had been en route from Ohio to Peterborough, Ont., to spend Christmas with her boyfriend’s family when the worsening weather forced the closure of Highway 401.

The couple booked a room in Chatham−Kent and decided to stop at Walmart on the way, but they didn’t get far after shopping.

Police turned them back, telling them they wouldn’t even make it to their hotel and that they’d have to spend the night at Walmart.

“We walked into Walmart and there were probably 100 people there with nowhere to go. They were locals who couldn’t get back to their houses,” Nickoli said.

Randy Morton and his wife, meanwhile, lived only a kilometre−and−a−half away and ventured to Walmart because they’d run out of cat food. Tins in hand, they too left the store only to be turned back.

“I told the officer I just need to get to the next corner and I’m home. He said, ’It doesn’t matter. Turn around and go back to Walmart.’”

Walmart said in a statement that there were approximately 50 customers who spent the night in the store, including some small children, and that staff pulled games off the shelves to keep people entertained.

The store’s deli team, meanwhile, served up a hot dinner and games were pulled off shelves to keep customers and their children calm and entertained.

The statement noted there was even an impromptu birthday celebration for one employee at midnight, complete with cake and candles.

“Our customers were fabulous sports — breaking out into holiday carols to keep spirits high!” the statement said.

Another Walmart in Fort Erie, Ont., also hosted a family that got stranded Friday night, the statement said.

Everyone was allowed to leave Saturday morning. Nickoli and her boyfriend abandoned their trip to Peterborough and turned back for Ohio, while Morton and his wife went home.

“I think when we first got there, everybody was in shock and they were a little bit upset. But they just said, ’It is what it is,’” Nickoli said about the experience.

“My faith in humanity was restored by the associates that work at the Chatham Walmart,” Morton noted.