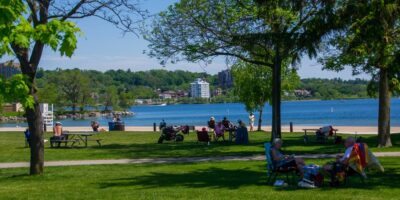 New measures and enforcement are coming to Barrie’s beaches, after another weekend of overcrowding and piles of garbage left behind.

“We’ve had some real issues lately of overcrowding at our beaches,” said Mayor Jeff Lehman on Monday, noting Wilkin’s Beach was especially hard hit. “It was not ever designed or intended to be a public beach, there’s no parking lot, no washrooms … it’s down in a ravine. You are going to hear additional measures being taken by the city to deal with overcrowding.” The measure, he said, would be announced within 24 hours.

Many wondered how the secluded Wilkin’s Beach became so popular all of sudden. The answer may be an article on Tourism Barrie’s website describing the beach with directions on how to get to it.

The suggestion by the mayor of tighter restrictions came following a call from one city councillor to close the beach altogether.

Ward 10’s Mike McCann posted to his Facebook account a plea to close the city’s beaches to all but residents and family of residents. “The GTA is one of the hot spots of COVID-19,” said McCann, “Right now, we’re in a state of emergency, so our mayor, Jeff Lehman, has the power to close all beaches to all non-residents.”

Late last week, the Town of Innisfil tightened restrictions on its beaches, especially that of Innisfil Beach Park; the Town instituted a rule requiring those on the sandy portion to remain in constant motion, with no sitting or sunbathing permitted. Outside the beach area, white circles were spray-painted throughout the park, at a distance of about 2 metres, to promote physical distancing.