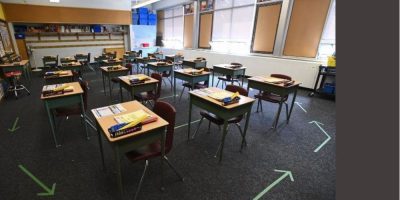 Ontario students’ math scores on standardized tests across three grades have either fallen or are stagnant at low rates, which the agency that administers the tests is attributing to COVID-19.

The Education Quality and Accountability Office released assessment results Thursday for the first round of standardized tests that students have written since before the pandemic.

“EQAO data show that Ontario’s student outcomes are similar to those of other jurisdictions, where the pandemic has had a more significant impact on mathematics than on literacy achievement,” the agency said in a press release.

Education Minister Stephen Lecce attributed the low scores to both the pandemic and teacher strikes that came in the weeks and months before that.

“We certainly acknowledge the disruptions of the strikes that preceded the pandemic then the pandemic that happened right after created significant impact on children,” he said.

“This trend is global in its nature. Every province that has standardized testing has corroborated this truth. When kids are disrupted, they’re out of class, they’re not in front of a teacher, they perform more poorly.”

Ontario closed schools for longer than any other province during the pandemic. The teachers for the most part engaged in several one-day strikes in late 2019 and early 2020.

Lecce announced Thursday that Ontario is developing a new math recovery strategy. He said the province will send “math action teams” to school boards deemed to be underperforming for extra help with math teaching practices. As well, the province will spent an additional $15 million to make digital math resources available, and will extend a tutoring program that was set to end this year for a few extra months.

Ontario introduced its new math curriculum into classrooms in September 2020, framing it as getting back to basics and giving students skills to get jobs of the future.

The latest round of EQAO testing was the first to be done online, and experienced some technical difficulties.

The Elementary Teachers’ Federation of Ontario said in the spring that some students were reporting significant system lags for the digital tests, while others have said they have completed entire sections, only to find the answers didn’t save.

The union had previously called for the testing to be paused due to concerns about “deficiencies” in the planning and preparation of the new digital format.

The Ontario Secondary School Teachers’ Federation said Thursday on Twitter that funding used to administer the EQAO tests last year should have instead gone into classrooms.

“For over 2 yrs, we’ve told the Ministry to focus on supporting students & not to rush standardized testing immediately following an unprecedented pandemic,” the union wrote.

Results from the Ontario Secondary School Literacy Test, which measures literacy standards up to the end of Grade 9, were also released Thursday. The EQAO says overall success rates are high, though it’s more difficult to compare them to the previous set of figures.

More Grade 11 and non-graduating Grade 12 students took the literacy test because they couldn’t during the pandemic, and they had higher success rates than Grade 10 students.

To address literacy concerns, the province is spending $25 million on an early reading program. Starting in the next school year, kids from senior kindergarten to Grade 2 will be screened for reading skills.