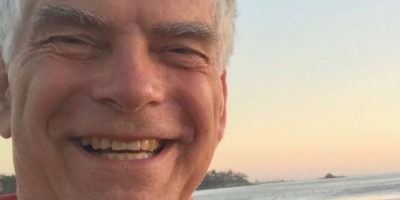 The city of Barrie has lost a guardian.

Al McNair, an urban planner and conservationist, died on September 14 of complications related to an aneurysm.

You may not recognize his name, but his handprint is all over the city.

When proposed developments threatened green space in the city, McNair was there offering sober second thought; sometimes looking for ways to allow the two to coexist, sometimes speaking against the development altogether.

He had a hand in the development of Roberta Place and Tollendale Village.

And he was vocal in his opposition to a proposal to build a baseball stadium on waterfront land on the south shore, next to the Military Heritage Park.

“I don’t know if many people know that there are huge old oaks in there,” McNair’s partner Catharine Mercer told Barrie 360. “And he was devastated to think that those old oaks were going to get chopped down when they had just planted oak from Vimy Ridge in the next part of the park. He was like, ‘Can you imagine what these oak trees have seen?’ And it was so cute because it was so important to him.”

Mercer said McNair felt the waterfront in Barrie was an absolute jewel that needed to be protected at all costs. The city, he would say, has done a fantastic job of keeping people close to the water. The condos are kept back, and people get right to the water.

Was there a project that was particularly dear to his heart?

“The one in front of him,” said Mercer. “He was completely passionate about something until it was done, or until he was beaten. And then he would just go to the next one.”

But McNair wasn’t just about planning and conservation.

He was also a family man.

McNair leaves two sons, a grandson and two granddaughters, “he was immensely proud of.”

He was known to break out in song and performed with the Kempenfelt Community Players, the South Simcoe Theatre and the Village Players of Coldwater.

And he loved to talk.

“Everyone who knows him, and that’s a lot of people in the city and county, will know that he loves to talk,” said his former wife, Barbara Marshall. “It really was hard to get a word in edgewise sometimes. And we will miss that now. Every week, our family has Zoom calls, and there was never any dead air. Al always had something to say about something at great length.”

McNair’s family hopes to gather with relatives and friends, at a future date, for a celebration of his life.

In the meantime, they want to thank the surgeons and nurses at RVH who cared for him, and the blood donors “who gracefully shared their life with him. And we can’t urge people more than to say, please go and donate because it’s made a difference in our lives.”