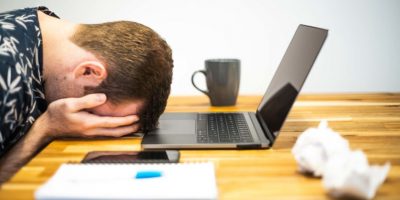 Kristen Wymer is a mom, health care professional and doctoral student who has been working from home for more than a year, spending up to 12 hours a day in video conferences.

Now, all of that screen time is taking a toll on both her physical and mental well-being. Wymer has developed migraines and back pain, not to mention becoming self-conscious about her appearance.

“I hate seeing myself on camera. I think as women in general, we tend to be a little bit harsher on our outward appearance,” she told CBS News correspondent Naomi Ruchim.

It’s been more than a year since many made the transition from working alongside colleagues in physical offices to connecting with others digitally from home to stop the spread of COVID-19.  Researchers at Stanford University say spending hours on conference calls is causing many to suffer from what’s being dubbed “Zoom fatigue.”

Four main factors are contributing to that feeling of videoconferencing overload, according to Jeremy Bailenson, professor of communications at Stanford:

“If someone was following you around your place of work with a mirror, that would make no sense at all. Yet for video conferences, we’re showing our real-time image constantly,” Bailenson said. “And what the research shows is this is fatiguing; this is draining and it causes us to get stressed and have a negative effect over time.”

Another recent Stanford study shows that women suffer from significantly higher rates of Zoom fatigue than men do. Among 10,000 participants, about 14% of women reported feeling either very or extremely fatigued after video meetings, compared with roughly 5.5% of men.

In particular, researchers found that intense Zoom fatigue was linked to “mirror anxiety,” a physiological response where a person’s reflection triggers negative feelings.

How to cope? Hide yourself

Fortunately, there are ways to deal with Zoom-related stress. Bailenson, the founding director of Stanford’s Virtual Human Interaction Lab, recommends keeping your reflection out of sight when using video conferencing software in order to better focus on the person who is talking.

He also suggests that everyone turn their own cameras off on some calls to avoid that feeling of being perpetually on display. “What I like to do is set norms in the meetings that we’re in. I would say half of my meetings, everyone knows you go in with the video off and you just have voice a conversation.”

Wymer said spending time with her family is the best antidote to the overwhelming feeling that accompanies her Zoom meetings.

“We take a drive and just wander out in the country and see the sunset. For us, that’s been helpful to have kind of different family time,” she said.