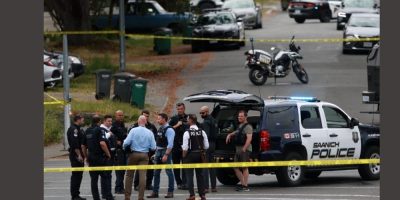 By Dirk Meissner in Saanich

Two robbery suspects believed to be wearing body armour died in a barrage of bullets exchanged with police outside a Saanich, B.C., bank on Tuesday.

Saanich Chief Const. Dean Duthie said homes in the area also had to be evacuated as police investigate a potential explosive device in a vehicle related to the suspects.

“This level of violence in my service with Saanich, being just shy of 27 years, there has been nothing to this extent in my experience,” Duthie told the media outside the detachment.

Duthie said police believe some officers will be released from hospital soon, while others have more serious injuries and have been taken into surgery.

Officers were called to a report that armed men had entered the bank Tuesday morning, but Duthie said the shooting started when the suspects left the bank, creating a situation that was very dangerous for the public.

“I don’t know who fired first at this point. But there were multiple gunshots that were fired. And where we’re at, I don’t know.”

He said the two suspects shot by police died at the scene.

Video taken of the shooting from a vehicle and circulating online shows six officers running in a crouched position along a building. One of the officers near the corner of the building is seen shooting his weapon. Dozens of shots were heard.

A woman who lives in the area told The Canadian Press that she was in her kitchen when she heard shots ring out shortly after 11 a.m.

“I heard pop, pop, pop. It was in succession,” said the woman, who would only identify herself as Karen.

“A few minutes later I heard sirens. I definitely heard multiple shots of gunfire. I was in the kitchen with the back door open and I heard the noise.”

Saanich is a community of about 120,000 within the greater Victoria area on Vancouver Island. It has its own police force.

The Bank of Montreal said in a statement that it was deeply saddened to hear of the incident and thanked emergency responders for their fast assistance in keeping the public safe.

“The safety and security of our customers and employees is our priority and our thoughts are with every person impacted by today’s events,” it said.

Tracy Yarr said she went around her house locking the doors and shuttering her windows soon after the police put out an advisory telling people to stay inside and avoid the area.

“I’ve locked everything down,” she said, adding the shooting had taken away her sense of comfort and calm.

“This is really astounding for us,” she said. “I mean, shocking.”

— With files from Hina Alam in Vancouver

Banner image: Saanich Police joined by Victoria Police and RCMP respond to gunfire involving multiple people and injuries reported at the Bank of Montreal during an active situation in Saanich, B.C., on Tuesday, June 28, 2022. Saanich police say two people are dead and six officers were hurt when they exchanged gunfire outside the bank. THE CANADIAN PRESS/Chad Hipolito

This report by The Canadian Press was first published June 28, 2022.