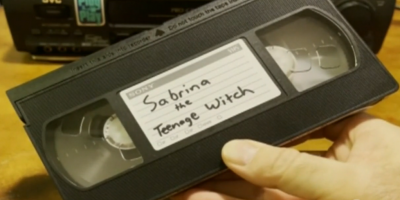 A Texas woman recently learned she was charged with a felony after not returning a VHS tape for over 20 years, CBS Dallas/Fort Worth reports. Caron McBride, a former Oklahoma resident, faced a felony embezzlement charge for not returning “Sabrina the Teenage Witch” to a movie rental store in Norman in 1999.

McBride told Oklahoma station KOKH-TV that she learned about her charges in Cleveland County after trying to change her name following her marriage in Texas. “I thought I was gonna have a heart attack,” McBride said.

“They told me that I had an issue in Oklahoma and this was the reference number for me to call this number and I did. Meanwhile, I’m a wanted felon,” she said.

According to court documents, McBride was charged in March 2000 for felony embezzlement of rented property. The location, Movie Place, went out of business in 2008, KOKH reported.

McBride said she doesn’t recall renting the movie and believes it may have been an old roommate who was at fault.

“He had two kids, daughters that were 8, 10 or 11 years old, and I’m thinking he went and got it and didn’t take it back or something,” she said. “I have never watched that show in my entire life. Just not my cup of tea.”

The charge has been dropped.