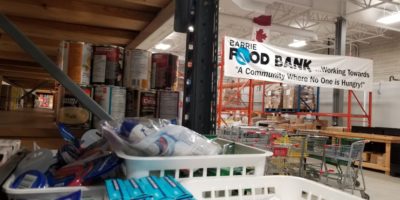 Due to COVID-19, this year’s Thanksgiving Food Drive did not accept donations of food. Sundborg says it was cash donations only.

“It’s not something we are used to doing. But it needed to be done to ensure the safety of donors and volunteers who would normally come in and sort 150,000 pounds of food.”

Sundborg says he’s very pleased with the way the community has come together and rallied around the food bank once again to help ensure there is food in the warehouse.

As the economy has reopened and people have returned to work, Sundborg says demand on the services of the food bank has not grown drastically in the last few months. That being said, Sundborg has taken his eye off the COVID ball.

“Of course, right now we’re in technically the second wave, and we don’t know what the impact of that is going to have on people. We’re anticipating that our numbers will grow. We just don’t know when they will grow.”

He says another key factor will be what happens with government assistance.

While numbers at the food bank have not shot up since the pandemic began about seven months ago, that doesn’t mean it hasn’t been busy.

“In the past week we served 280 pre-packaged grocery orders to families and individuals. We are kind of seeing about 200 grocery orders a week and almost 800 a month that are going out the door. That equates to almost 1,500 people using our service every single month.” according to Sundborg.