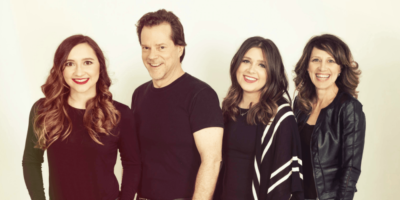 The Argues are a four-piece local band, and they marked their first album of original music at the Barrie Waterfront Festival several years ago. Now, they’re back with new music in the lead up to a new album. To celebrate, they’ll headline the BWF’s Friday night lineup.

The first single, I Don’t Need You, was released last year and their second, written by the youngest family member, Sabrina, will be released at the beginning of June. They will be playing it, some of their older material and a few covers at the BWF.

“We like mixing it up on stage,” said Lauren, who, like her sister, grew up on rock and roll music and both still love a lot of the older hits.

For their own music, the band has a blues country rock sound. At the 2017  Toronto Independent Music Awards, The Argues won the Best Country Award and they have been moving in that direction ever since.

Songwriting is usually a collaborative affair, but more recently Sabrina has taken the lead. She wrote their second single and the family said it is their best song to date. It has elements of country, rock and pop, and good riffs.

“(It’s) not a dark song,” Sabrina said. “I like to write songs that will have a wide appeal. I  like (people) to take their own interpretation and meaning, to connect to it in their own way.”

Sabrina is currently in her last year of high school. She is a multi-instrumentalist and shares vocals and with her sister.

Lauren finished her high school on-line and went to work for father, an accountant until she figured out what she wanted to do next. Accounting continues to be her main focus and she is currently in her second year at the University of Waterloo. Bass guitar is her main instrument and it’s been seeing a lot of use, lots of practicing at school as a stress release.

Michael, guitarist for the group, taught the girls the basics. He has always had an interest in music and shortly after meeting Chantale purchased a guitar for her birthday and taught her to play. The couple would play at family gatherings. They married in 2005 and after their children were born, they discovered them singing along at home.

The decision to focus on music as a family started in 2005 with a move to Toronto. The need for more space prompted the family to move north. They needed a place to park their touring van and trailer and they found it on the outskirts of Barrie, in Springwater, where they also built a recording studio.

The BWF kicks off the summer of performing live for The Argues in and around Ontario and it is their only local gig. While they have garnered a local following, their music has a greater reach and the band is particularly popular in Saskatchewan.

Songs from their first album ‘Something New’ have been played on stations worldwide – New Zealand, England, U.S., and Canada. They released two music videos for the album and were selected in the top 10 for CBC Searchlight 2017 for the song Run Till You Drop.

The Argues perform on Friday, May 24 at 8:30 p.m. at the Barrie Waterfront Festival, Centennial Beach Park. Admission is free.  For more, see the http://theargues.ca/wp-V2