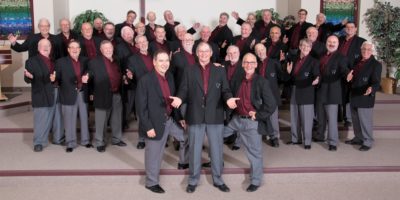 The Barrie County Chordsmen are hooked on a feeling and they want to share it. The a capella vocal group is hosting several upcoming events – two workshops and their annual show, which serves as BCC’s main fundraiser for the charities they support.

“We have hired an incredible group of young men called “Yonge Guns” to come up to Barrie and run a vocal workshop. They have done these workshops all over southern Ontario,” said Brian Tracey, president of the BCC. “We are doing one in the morning at Eastview Secondary School for students -we are busing students in from other high schools too – and then we are running a second one from 1-2 p.m. at Georgian College.  This one is open to the public and is free.”

It’s the first time the BCC has brought in a group for vocal workshops and Tracey is hoping to attract people who like to sing and are interested in improving their skills. It is in the lead up to a barbershop competition in Barrie next spring. It will be held for the first time in conjunction with the  Barrie Music Festival the BCC will be offering a $400 prize although that could rise to $1,000 depending on attendance at the workshop and if people bring in a special promotional coaster or photo of it from one of the competition sponsors. For details, and to register for the free workshop Sept. 27, see www.barriecountychordsmen.com

Singing four-part harmony is where it’s at for the 50 plus members of the BCC. Their annual show theme is Hooked on a Feeling and that’s pretty much why they like singing.

“Why do we do this? Because there’s really something magical about ringing chords,” said Tracey, who also sings with the BCC. “When you hit those four notes it sounds like more than four voices – it creates harmonics and the overtone beyond the four notes and when that happens you and the guys look at each other and go OMG that was awesome. We want more people to experience that.”

The Yonge Guns will also be performing a set at the BCC show. The Toronto-based group is considered to be one of the premier a capella quartets in southern Ontario. The four members have been singing together since high school and currently perform all over the world.

The show takes place Saturday, Sept. 28 at Hi-Way Church, 50 Anne St. N., 2 p.m. Tickets are $25 for adults, $10 for students, available at www.barriecountychordsmen.com or call 705-309-0907. The concert is a fundraiser in support of two charities – Harmonize for Speech and Sing Canada Harmony.