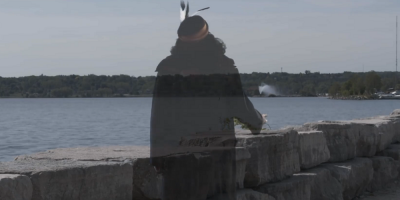 Here’s a show you should leave your cellphone on for.

Theatre by the Bay (TBTB) is premiering Ghost Watchers on Wednesday, a ghost tour with a high-tech twist. “We’ve added an augmented reality component to it. So you actually get to hear the ghosts tell their stories,” TBTB Artistic Director Iain Moggach told Barrie 360. “And that adds, of course, a whole other level to be experienced.”

The audience is guided to several locations through Barrie’s downtown core, starting from Heritage Park. Using QR codes, participants will be able to view the “ghosts” through their cellphones as if the spectres were actually there. “It’s been very surreal for the actors playing the ghost, to see a show open and not potentially be there,” added Moggach. “But, you know, I think everyone on this project has just been so delighted to be able to do something as innovative as this, and to do and to make theatre right now, which a lot of companies have not been able to, to provide.”

“I think one thing that always impresses me about creative people, is just the fact that you say this is the box you can draw in, and we do all sorts of cool stuff within that box,” he continued.

The entire experience has been designed to be performed in a mid-pandemic world. Including the purchasing of tickets. “Audience members have to purchase their tickets ahead of time, just part of our COVID procedures. That means we also have the ability to contact you, depending on how the weather is,” said Moggach. “If things are getting really bad, like if there’s a crazy storm or something like that, of course we can just move your tickets to another day.”

Moggach says you should have a fully charged cellphone and headphones, as well as comfortable shoes.

Tickets can be purchased through the Theatre by the Bay website. Ghost Watchers was developed in partnership with Tourism Barrie.

Feature image courtesy Theatre by the Bay via Facebook.