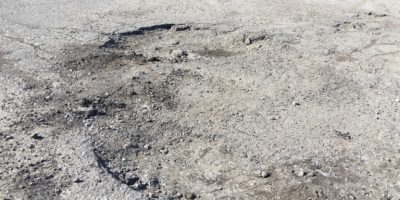 It’s been a week since the tempest on Twitter in Barrie, unleashed when Mayor Jeff Lehman sent out a message about being blamed for the number of potholes on city streets.

“This is a bad year, no question. The number of potholes relates to what kind of winter we just had. If we had a deep freeze winter that stayed cold it’s not as bad. Even if we had a warm winter, where it stays warm, it’s not as bad. But, it’s the up and down that really beats the heck out of Barrie’s roads.“

That’s exactly the kind of winter we had…lots of thaws followed by minus-15 to minus-20 temperatures. And . Weather data for Barrie dating back 150 years shows a steady increase in temperature as well as rain. Water gets into the cracks in the road and that’s when the damage begins.

Biggest complaint when surveys are taken is about the roads

Lehman says infrastructure also has a lot to do with it.

The city addresses the issue through its infrastructure fund – which accounts for one percent of your tax bill – slowly spending a little bit more in terms of fixing roads.

Symptom of a larger problem

“We live in a country where the system of government was built in the 19th Century and municipalities have 19th Century tools to try to solve 21st Century problems, like roads that are used a lot more than our founding fathers ever would have thought of. Because Barrie grew so fast, in a very short period of time, especially in the 80s, 90s and into the 2000s, a lot of the stuff that was built then was fine – for 20 or 30 years – and now the bill is really coming due. During that period of not much repair work was required but, I think, some also deferred.

Lehman says we know a lot more about how to look after earlier in life so that it lasts longer.

“It’s like your car. If you never change the oil your car’s going to be toast before you get to 100K.”

There is a coordinated effort that happens every year to find potholes, assess the damage and fix it. This time of year it’s just a temporary fix, due to the weather and the availability of asphalt (which is in short supply during the winter months).

Different work that can be done at different stages of a road’s life. Early on, Lehman says you fill cracks, maybe do a limited depth resurfacing taking off two or three inches of the topcoat but not the base because it’s still okay. By sealing the surface (which can last 10 to 20 years) you prevent the water from getting in, which causes potholes.

“The work that we try and do every year is to make the long-term situation better so that, frankly, there are fewer every year.”

When damage gets to the condition of Duckworth Street, there’s nothing can be done but a full rebuild, which means taking up the asphalt, and tearing up and replacing the base.

Research continues into how to build better roads and for a better option to cold mix as a quick fix. Problem is, what works in one type of weather doesn’t always work in other types of weather. So for now, asphalt it is.

The best way to report a pothole is through the PingStreet App on a smartphone. Take a picture and sends it directly to the city with a geocode to make it easy for work crews to find. You can also call the city at 705-726-4242 or visit Barrie.ca and do a search for potholes.

As for compensation for damage done by a pothole, the city does carry insurance for such damage. Apllication can be made to the city, however, if the city has been meeting minimum provincial standards for filling potholes a claim may be denied.