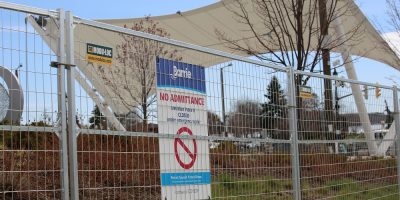 The City of Barrie has filed an injunction against the organizers of recent anti-lockdown protests.

Barrie City Hall issued a notice of application with the Ontario Superior Court of Justice on Thursday morning, for an injunction restraining the organizer from organizing, hosting, and participating in further gatherings on city property.

“We share the frustration of our community,” said Mayor Jeff Lehman. “These individuals continue to blatantly disregard the law and public health orders and their actions threaten our efforts to curb the spread of COVID-19. We will continue to look at all options to hold the organizers accountable for their actions.”

This is the latest measure taken by Barrie City Hall; Mayor Lehman issued an emergency order on April 29 to close and fence off Meridian Place, the site of weekly protests.

Over the past several weeks, 20 tickets have been issued under the Reopening Ontario Act, with fines of over $18,000. In addition, there have been seven summonses issued, with court dates pending. More tickets could be issued up to 30 days after the offence and summons to appear before the courts could be served up to 6 months after the date of the offence.