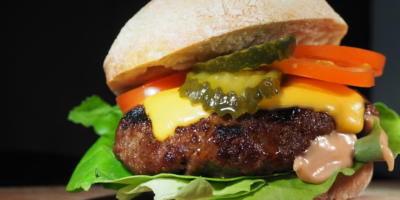 A university in London is working to tackle climate change by taking beef off the menu. Goldsmiths, a part of the University of London, will no longer serve beef burgers, beef burritos and the like on its campus.

Goldsmiths will take beef products off the menu starting in September, it announced Monday. The effort is part of a mission to become carbon neutral by 2025.

Perhaps the biggest change the university is making aside from the elimination of beef is a fee of 10 pence (12 cents) on bottled water and single-use plastic cups. The goal is to “discourage use, with the proceeds directed into a green student initiative fund,” the college’s new warden, Professor Frances Corner, said.

“The growing global call for organizations to take seriously their responsibilities for halting climate change is impossible to ignore,” Corner said.

Goldsmiths’ new Warden Professor Frances Corner has announced an ambitious drive for the College to be carbon neutral by 2025.

The plan includes the removal of all beef products from campus outlets and a 10p levy on plastic bottles https://t.co/sYRHZ0gxxa

According to a news release, Goldsmiths currently emits around 3.7m Kg of carbon emissions each year. It plans to be carbon neutral within the next six years.

“Declaring a climate emergency cannot be empty words,” Corner said. “I truly believe we face a defining moment in global history and Goldsmiths now stands shoulder to shoulder with other organizations willing to call the alarm and take urgent action to cut carbon use.”

A recent United Nations scientific report finds human-caused climate change is making food more expensive, scarcer and even less nutritious. The No. 1 way consumers can contribute to solving this problem? Switching to a plant-based diet.

The UN’s Intergovernmental Panel on Climate Change says agriculture, forestry and other land uses produce nearly half of the world’s methane emissions, a greenhouse gas that also comes from cows. Eating more plant-based foods and sustainably-produced meats can change land use and mitigate climate change.