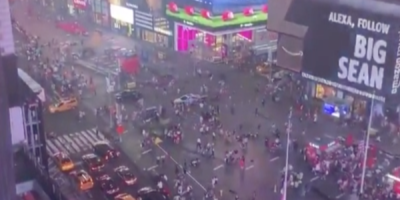 There was widespread panic Tuesday night in Times Square after crowds mistook a backfiring motorcycle for gunfire and a possible mass shooting, CBS New York reports. The bike was in a large group of motorcycles traveling through the area at the time.

But in the wake of the recent mass shootings in El Paso, Texas and Dayton, Ohio, chaos ensued as people raced to escape what they thought could be an active shooter carrying out another attack. Some witnesses called it a stampede.

CBS New York said people were literally running out of their shoes, dropping their bags, jumping over counters, even trampling those who couldn’t keep up. Lots of children were crying.