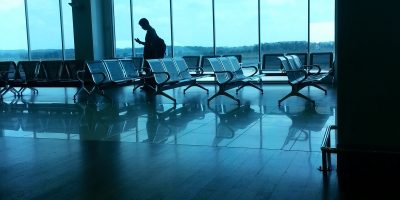 There’s no designated area for international travellers, no government officials waiting with clipboards, no security, in fact, besides the cost, there’s no real difference at all once you walk inside one of Canada’s newly mandated quarantine hotels.

For Hussain Gandhi, who has spent the last 24 hours inside an approved quarantine hotel, the cost has been threefold.

“I feel like I committed a crime going back home to take care of my sick father,” Gandhi told Barrie 360.

Hours earlier he had tweeted that he “slept without eating,” calling it “unacceptable.”

When Canada’s new mandatory hotel quarantine program for non-essential travellers took effect on Monday, Gandhi had already gone through the painful hurdles of booking a room.

Like many other fed-up international travellers, he took to social media and aired his grievances.

the hotel is not prepared to service the number of guests arrived, I was suppose to receive my dinner at 7 but I didn’t receive it until 10 at night (after 24 hrs of travelling). They are charging 400 dollars a night and all they served is a box rice without any curry (2/3)

He was in Mumbai on Friday when the federal government announced its approved list of hotels – which international travellers could book minimum three-day quarantines at.

“I went online first to book my room through the hotel itself and it would have cost me $350 total for three nights,” Gandhi said. “The problem is that I had to call this international number from Health Canada to book my room and nobody answered.”

He ended up messaging a friend in Canada and asked them to wake-up early to call the toll-free North American number on his behalf – which he had to do because the federal government contracted GB Travel Canada to run the quarantine booking system and for some reason, it’s all done over the phone.

@JustinTrudeau @CitImmCanada @canada @canborder everyone is facing a long call waiting to book govt. approved hotels for quarantine. I need to be in Canada this Thursday & am on the phone for the last 36 hours & still unable to make the booking. We need to get back home. HELP!!!

On the phone for 3 hours waiting to reserve mandatory #hotelquarantine in #Canada which they are making me pay >$1000 for. Ridiculous service and PHONE ONLY, and you can’t board flight w/o reservation. In 2021. Seriously @Canada?? #COVID19

When Gandhi’s friend finally got back to him, he was already in Germany for a stop-over.

“It took hours but they finally got through and booked a room, but it went from $350 total to costing me $400 a night.”

When Prime Minister Justin Trudeau first introduced the mandatory hotel quarantine policy late last month he warned travellers it could be as much as $2,000 for a three-day stay.

When Gandhi finally landed at Toronto’s Pearson airport from India, he waited 45 minutes for a shuttle. “I could have gone into the city if I wanted … pure loophole there, there’s nothing to stop travellers from just leaving and there’s also no government officials there to help answer questions.”

Gandhi assumed when he walked into the government-approved hotel there would be at least something different for international travellers, but there wasn’t.

“There’s absolutely no distinction between domestic and international guests at all in the lobby, which is so small, and the hotel was majorly understaffed,” he said. “I figured for the extra money I was paying there would be like a PPE kit or something, even a bottle of water but I was told to drink tap water.”

Nobody has come to his room for the last 24 hours and now Gandhi is awaiting the results of his Covid-19 test – which can take three days.

He’s unsure if the hotel will give him a rebate if the test comes back negative before day three of quarantine.

“Our officials are working very hard to ensure that quarantine system is in place by Monday, and we will be able to communicate with Canadians with regard to instructions on how to comply with those measures.”

Not everyone flying into Canada is subject to the new rules. Foreign diplomats are among those exempt. Diplomats and their families are also exempt from taking a PCR test when they arrive.

The new quarantine rules came into effect the same day Statistics Canada released data showing a 90 to 95 per cent drop in international arrivals compared to Jan. 2020.

Same here. You are going to strand thousands of Canadian citizens because we can’t book hotels. @TravelGoC https://t.co/qyzMYuGIEA